Legend has it that in Pagan Times in Northern Europe The Fire of The Gods was stolen and given to man by Snake Lightning which lit up The Tree of Knowledge that granted consciousness to man. In order to appease the Gods men hung offerings of apples, bread rolls, and flowers on the branches of a tree. The tree would be set on fire in order to return the gift of fire to the Gods. This tradition was adapted to the Christian faith in the 8th Century.
St Boniface used the triangular shape of fir trees to introduce the concept of the Trinity. Apples were used to decorate the trees until a harsh winter killed many apple trees in 1858.Other forms of decoration were invented such as glass balls  and the Christmas bauble became popular as the use of fir Christmas trees as a decoration spread around the world.
I use needle felting which uses wool to make baubles ,replacing my old plastic ones for a natural substance.
Traditional forms may include the fir tree, the candy cane, candles, wreaths ,bells ,stars and more recently birds, and snow men. 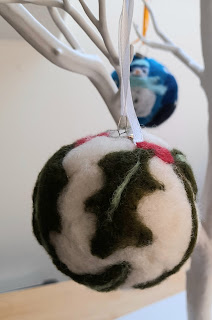 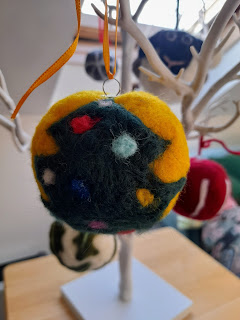 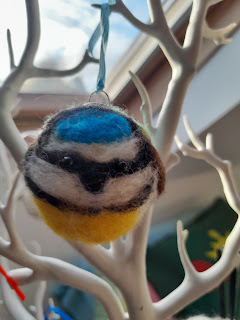 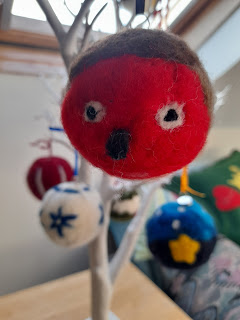 Posted by Janet Cockerill at 14:49